Family Fun Day in Pouring Rain - Yes it Can Be Done! 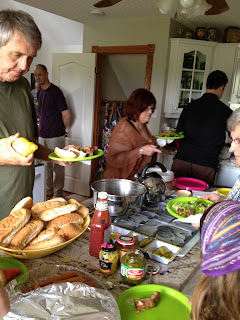 Well, our annual Family Fun Day (aka Family Reunion) was this past Saturday. It poured rain almost all day so I had to hold it inside our house. That called for some last minute revisions of games, events and the meal!

But guess what? As horrifying as it first was to figure out how 30 people were going to fit into our home, and be entertained, and fed at tables (I don't like people eating on couches and antique chairs), it worked! 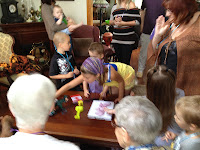 I still had everyone wear an ancestor name tag and find their matching ancestor spouse for a partner for the games. Then I placed the 10 objects on the coffee table and gave a 2 minute time period to study and memorize them. I learned the hard way that 2 minutes is way too long as almost every team got it right at the end. In future I'd give a one minute time limit or more objects. 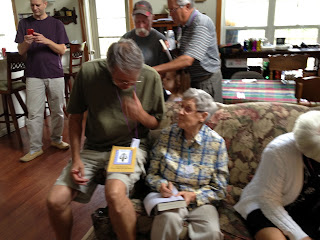 After they studied the objects we covered them and handed out a 10 question multiple choice quiz. This was funny because the questions were all about my husband and I! So whoever knew us best would score well. 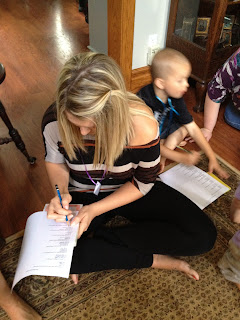 I noticed a lot of cheating going on (One of the grandchildren called it research, not cheating) with folks looking at other people's questions for answers.

After the quiz was done, we had a 10 question oral math round. As a former teacher I should have known better, but I told the teams to yell out their answers and first team with right answer would get one point. Big mistake. Because I made the questions super easy, there were many simultaneous shouts of answers and it became impossible to know who said it first. But it made for a lot of laughter.

And really it wasn't very fair as I taught Math in High School and guess what both my sons are amazing at? Yep - Math. So I kind of figured they'd score well for their teams and they did, with the most points. Good thing my daughter was late arriving or she'd have been a strong contender because she too is a math whiz. 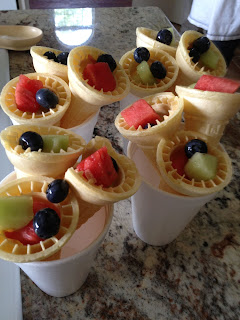 Anyway it was fun but we had a tie between the two teams both my sons were on. I had to come up with a quick tie breaker so I played one song from my iPhone and whoever got the name of the song and the artist would win. I chose Stereo Hearts by Adam Levine and Gym Class Heroes so that made it tricky as they both kept guessing Maroon 5 as the group! Cheating almost won the day as one team tried to Shazam the song using their iPhone for the answer. 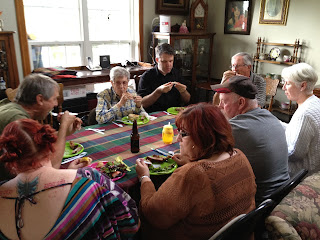 Seating for the meal was fine - we brought up portable tables and a card table, and used the mudroom, dining room, living room and entertainment room to set places. No one complained so I think it went well.

All in all a good time was had and the last family member left at 9 pm (it started at 1 pm). And yes I'll do it again next year even though I was exhausted and sore and aching everywhere by the time it was over. But that's okay as I rested up all day on Sunday. I'm already planning the 2013 Family Fun Day.

What a fabulous Fun Day!! Thanks for the great blog!!

Lots of fun and laughter - sounds like the rain didn't dampen anyone's enthusiasm.

Sounds like a lot of fun! I'm glad you found room for all those tables! I don't like people eating all over the place either.