I can't seem to locate the ship's manifest on-line - but my cousin sent me a copy of the Ships Manifest. ( so I know it exists ) Our family ( Fields  - 5 family members ) came  over from Liverpool on the SS City of Washington in 1852. Pithin Page  was the Master.

My question is that I noticed that you wrote that ships coming to the States before 1855 had no receiving station - what does that exactly mean? Is there anyway to find out the location ( or most likely ) where the ship docked and let off my anscestors??? Or do you think I will never know the answer?

Can you point me to a place I can go that might be able to give me as much information as possible? Ex. - who did all of these ship's manifests filled out by the Masters get turned in to ???  If they all got saved, someone must be holding them  ( correct ??? ) 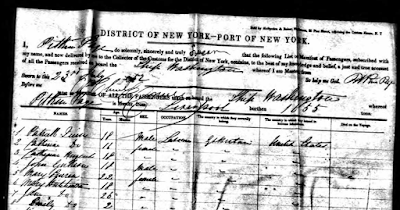 Billy you haven't told me where your ancestor landed - America? Canada? Or somewhere else?  If it was in Canada, you have a challenge ahead of you.

Before 1865 ships passenger list to Canada did not have to be archived. There are some lists but the challenge is finding them as they are few and far between. However there are substitute lists such as Shipping Company Records, Immigration Agent Records, St. Lawrence Steamship Records, etc. See Filling in the Gaps at http://www.olivetreegenealogy.com/ships/canada/ for links to alternate records for pre 1865 immigration AND for details on any that are available only offline.

If your ancestor landed in America you can search passenger lists from 1820 on at Ancestry.com

. They have published indexes and images for all ships landing in USA.  In fact I had a quick look and Ancestry.com

has published indexes and images for the City of Washington landing in New York in March, July, and October of 1852.

Re your comment that I wrote "ships coming to the States before 1855 had no receiving station" that is not an accurate quote. I assume you are talking about my page online for ships arriving in New York at http://www.olivetreegenealogy.com/ships/tousa_ny.shtml. The accurate quote on my page, which referred only to New York, is "1624-31 July 1855: no receiving station"