Pte. W. R. Bulger's name is stamped on the side of this Canadian WW1 Medal which my husband and I have in our WW1 collection. In tribute to Private Bulger and all the men and women who have served and continue to serve in defense of our countries, I will be posting images and research on the various soldiers whose identified items are in our collection.

Pte. Bulger's Regimental Number is difficult to read but it ends in 2369. He is noted as being assigned to 2-CMR which stands for 2nd Canadian Mounted Rifles.

A search for his Attestation papers online reveals that his full name was William Robert  Bulger and his Reg. Number was 3032369. He was born Sept. 28, 1888 in Georgetown Ontario but was living in Toronto when he enlisted.

His next-of-kin was his mother, Mrs. Margaret Bulger in Toronto. He gave his occupation as Attic Trimmer. The year he enlisted is not given but it was probably either 1917 or 1918.

Sadly William never made it home from the war. He was killed August 11, 1918 and is buried 3/4 Mile South of Amiens, France in the Hospital Military Cemetery.

The CEF Burial Register states that "while en route to his Battalion he was wounded by a bomb dropped from an enemy airplane. He was evacuated to #48 Casualty Clearing Station where he succumbed to his wounds" It was further noted that he had penetrating schrapnel wounds in his back.

Thanks to Lisa Haas we can also read a newspaper clipping about William's death. Lisa's great-grandfather's brother was married to William Bulger's sister and Lisa had this clipping in her research files. 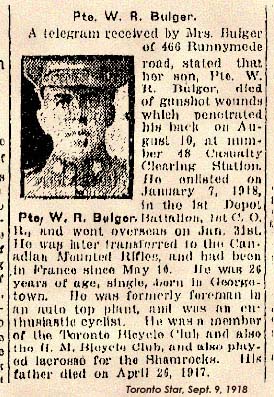 William Robert BULGER is a relative of ours. I am currently adding the Census information for James (Jas) and Margaret BULGER to my LEGACY FAMILY TREE. My Uncle Bev BULGER, a Nephew was raised by Margaret and I have been searching for his birth parents, as well as my two cousins Don and Bruce Bulger.

Would it be possible to get the e-mail address for Lisa Hass yo request assistance in finding information on the BULGER FAMILY.

Norm, I have posted on Lisa's Facebook page but you did not leave a contact email for yourself.

Sorry Lorine, it is:
normbmoore@gmail.com.

I just finished drafting a letter to
you and included 2 photo's and two documents. when I clicked on Send,
I noticed it was to a 'no-reply
address so I cancelled.

Thank you for passing on the information to Lisa! Unfortunately
I will not use Facebook. Security issues! Take care ~~~ Norm!

I really appreciate these "Please prove you're not a robot" that I need a magnifying glass to see, and even then I still cant read it!